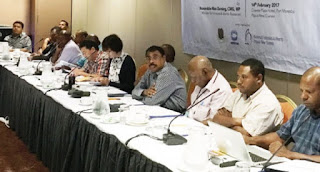 To begin this process, NFA yesterday hosted a day-long meeting with its partners from the private sector as well as its bilateral partners which include Japan, Philippines and Taiwan. The day long consultative dialogue which was held in Port Moresby, under the theme “Harnessing Working Relationship with the Fishing Industry for General Sustainable Management and Development of PNG Fisheries and Marine Resources”. Mr Kasu said from the outset, fisheries and more particularly tuna, remained the largest earner in the industry not just in PNG but the Pacific at large. He said the focus to increase benefits, stems from agreements reached from meetings, including the recently held Pacific Island Forum Leaders meeting.

“This meeting is basically for us (NFA) to sit down with industries and look at where we are going, and advise them on some of the things that are not going well while also the rules and regulations so that we can realign. “At the same time to identify important constraints and obstacles so that we can chart a way forward,” he said. He said with government policy now looking at 100 percent of the catch being landed on shore and processed in the factories, the intent of the meeting was to find out how both parties could collectively meet these important policies. Mr Kasue had explained the meeting was the first for 2017 and the start of more being planned for the year. He said NFA did not meet in 2015 and in 2016 for various issues including the yellow card issue. Post Courier/ONEPNG
SHARE THIS
Share it Tweet Share it Share it Pin it