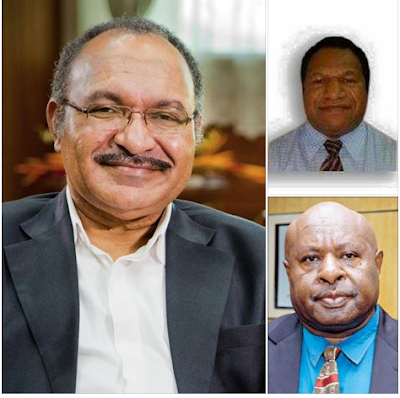 Land deals amounting to 78.4 million kina and orcestrated by Government agencies, Senior Public Servants and the Private sector has now led to the recommendation for suspension of 5 Senior Public Servants. When making the annoucement today, the Prime Minister said these deals and purchase of land did not follow proper process which is through the NEC and warrants a Commission of Inquiry.

He claims that The NEC only approved The relocation of Defense Force establishments but was not informed of the execution by bodies concerned and individuals. The investigations will focus on the purchase of POrtion 406 (Over K46m) located at Manu Manu, Central Province, Portion 422 (K 7.2m) Portion 423 ( K9.2m) by the Dept of Defence.

In addition the COI will also focus on the acquiring of land behind the ATS by the Defense Dept at a cost of K15.4m. These deals will also be investigated by the Fraud Squad and the Ombudsman Commission. Individuals that will be recommended for suspension to the NEC are the Secretary for Defense, Secretary for Lands Dept, the Managing Director of the Kumul Consolidated Holdings, Valuer General and the Managing Director of MVIL. MP's Fabian Pok and William Duma will now step aside from their duties as Ministers for SOE's and Defence. National Planning Minister will now oversee SOE's while Housing Minister Mao ZEMING will oversee the Defence Force portfolio.pngfm/onepng
SHARE THIS
Share it Tweet Share it Share it Pin it