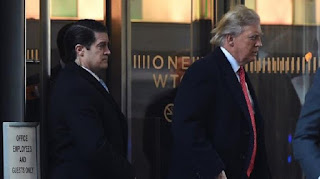 The unclassified report says the Russian leader "ordered" a campaign aimed at influencing the election.

Moscow has not commented, but Russia has previously denied the claims.

After being briefed on the findings, Mr Trump stopped short of accusing Russia of interfering, saying only that the election outcome was not affected.

The 25-page report says that the Kremlin developed a "clear preference" for Mr Trump.

Russia's goals, the document added, were to "undermine public faith" in the US democratic process and "denigrate" Democratic candidate Hillary Clinton, harming her electability and potential presidency.

"We assess Russian President Vladimir Putin ordered an influence campaign in 2016 aimed at the US presidential election," it said.

Hacking into the email accounts of the Democratic National Committee and top Democrats;
Using intermediaries such as WikiLeaks, DCLeaks.com and Guccifer 2.0 persona to release the information acquired from the hackings;
Using state-funded propaganda and paying social media users or "trolls" to make nasty comments
The identities of the Russian agents allegedly directly responsible for the hack are known to US authorities but have not been released publicly, reports say, citing intelligence sources.

The document, a cut-down version of the classified report presented to President Barack Obama on Thursday, was released shortly after intelligence chiefs briefed Mr Trump on their findings.

Since winning the election, Mr Trump has repeatedly questioned US intelligence claims of Russian hacking. In a statement after the briefing, the president-elect declined to single out Russia, but said he had "tremendous respect for the work and service done" by those in the US intelligence community.

"While Russia, China, other countries, outside groups and people are consistently trying to break through the cyber infrastructure of our governmental institutions, businesses and organisations including the Democrat National Committee, there was absolutely no effect on the outcome of the election," he said.

"Whether it is our government, organisations, associations or businesses we need to aggressively combat and stop cyber-attacks. I will appoint a team to give me a plan within 90 days of taking office."
Source:
BBC
SHARE THIS
Share it Tweet Share it Share it Pin it