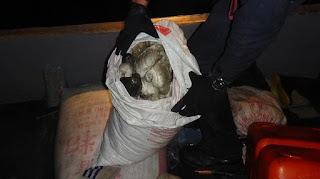 However, concerns have also been raised about law enforcement agencies, including National Fisheries Authority, appearing to have been compromised and cannot discharge their constitutional duties with impartiality.

These were among a number of serious issues raised at an urgent top-level meeting convened by Governor Titus Philemon at his office in Alotau on Tuesday (Jan 11).

“We have a big problem on our hands, not only about foreign fishing boats illegally operating in Milne Bay waters but also our own people engaging in illegal fishing activities,” Governor Philemon told the meeting.

He claimed that a member of parliament was encouraging people to dive for BDM in the Engineer Group of Islands when there was a current ban in place.

“That’s my biggest concern. How are we going to handle this? People are diving in Woodlark, Tubetube, Kwaraiwa and Anagusa and the NFA and the police are not doing anything about it,” Philemon said.

“As governor, I can’t sit back and allow illegal fishing activities to continue.

“It’s unfair. The rest of our people are law-abiding and respect the law but a minority, encouraged by certain leaders, are breaking the law.

“Don’t tell me that some people are inviting the Vietnamese to come here and fish illegally.”

“Most of these activities are happening in Samarai-Murua,” he claimed.

The NFA Board imposed the ban in 2010 initially for three years, but extended it twice since then. After that, the Board decided late last year (in 2016) to lift the ban for a temporary trial opening of the fishery, beginning on December 1.