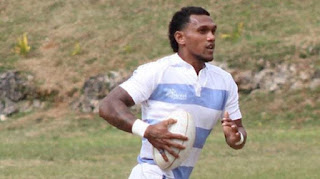 Captain of the Tongan Rugby Sevens team Atelea ‘Okati, has been confirmed as one of the people killed in the Veitongo crash.

The other person killed was ‘Unaloto Lepa.

The crash occurred yesterday morning on Taufa’ahau Road in Veitongo.

Police said a car heading west driven by a 30 year-old man from Halaleva and carrying three passengers tried to overtake another car crashed head-on with a minibus that was heading east.

Apart from the deaths, two other passengers received major injuries and one is in a critical condition.

This latest fatal death brings the total number of deaths on the road in 2016 to 18.

Acting Chief Superintendent Tevita Vailea said he was saddened by the fact that so many families had lost relatives on roads this year.

He said the death toll was 10 higher than it was at this time last year.

He urged drivers to be more careful on the road in the lead up to the New Year.

“While the full circumstances of Thursday’s crash are yet to be determined I can say that all too often Police are attending serious crashes that are avoidable,” Acting Chief Superintendent Tevita Vailea said.

He said fatigue, alcohol, speed and inexperience were all being considered as factors in the most recent crash.

“Crashes like this are preventable and we all need to do our part to reduce deaths and injuries on our roads,” he said.

“We extend our sympathy to the families of those involved and our thoughts are with their loved ones at this tragic time.”