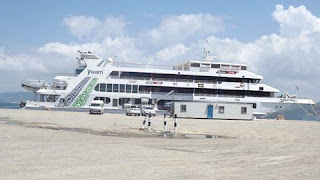 Central Governor, Kila Haoda while presenting a cheque of K100,000 to the medical ship, says the Amazon Bay is the most isolated village in the Abau district.

Governor Haoda said he is very grateful they have reached Amazon Bay.

He said that the newly refitted ‘MV YWAM PNG’ made its second voyage to Central Province in the space of 12 months earlier this year, visiting villages along the coastline, with a particular focus on the isolated Amazon Bay area in Abau District.

More than 3,500 people were helped during that voyage alone, engaging more than 19 villages with basic primary health care and selected specialized services.

Governor Haoda said the medical aid, treatment and the training they gave to the villages and the local doctors will help in the long run while they are gone.

He said the people in rural areas are really touched by the work of the YWAM volunteers and he hopes to strengthen the relationship so it can continue into the future. NBC/ONEPNG
SHARE THIS
Share it Tweet Share it Share it Pin it