Evicted Morata settlers to be resettled 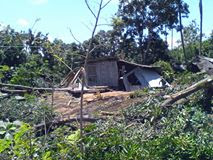 Settlers from Morata who were recently evicted by NCDC will be relocated in due time. That is the confirmation from NCD Governor Powes Parkop.

He said the settlers will also have their demolished church rebuilt at the expense of NCDC as it was not his intention to destroy their homes.

However, Governor Parkop said they were given eviction notices earlier to vacate the land which was not theirs but they failed to honour the notice and hence the demolition.
He assured the leaders of the settlement that they will receive the assistance they need like other cases to do with eviction of settlers occupying state land.


More than 3000 settlers from Morata one in the National Capital District were forcefully evicted by the city authority to allow construction of a new road from Gerehu to Waigani.
The evicted settles where now finding it hard to resettle and start a new life again after their homes and properties were destroyed by the city authorities last week.
Morata One community leader Eric Steven said National Capital District Commission (NCD) failed to allocate new land or pay them compensation to start a new living prior to destroying their homes and properties and forcefully evicting them.
"We have been living in that piece if land for almost two generations nowbl because its a customary land and not state land, " Steven told local media the National
"However, we were issued a stop work notice by NCDC on August 23, 3016 and a week later on August 30, 2016 we were issued a demolition notice".
"There was no eviction notice and now more than 120 houses were demolished, which include rent houses and about 3500 people are displaced are we are helpless".
"We want Governor Powes Parkop to come clear in that arrangement and address our problem".
SHARE THIS
Share it Tweet Share it Share it Pin it