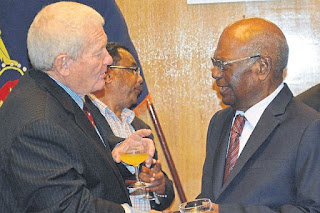 A SENIOR Australian crown counsel, Harrold Terrance Foulds, was sworn in as a judge of the Supreme and National Court on Friday, bringing the total number of judges in Papua New Guinea to 41.

Governor-General Sir Michael Ogio officiated at the swearing in ceremony, which  was attended by Chief Justice Sir Salamo Injia and senior judges.
Foulds, 67, was appointed on Oct 31 to serve for three years.
Attorney-General and chairman of the judicial appointments committee Ano Pala said the appointment would strengthen the judiciary’s capacity to deal with the growing backlog of pending cases.

From 1991 to 1994 he served as the crown solicitor in the Norfolk Islands.
At the time of his appointment Foulds was the principal/senior crown counsel, civil litigation in the office of the Director of Public Prosecutions and the Solicitor General’s Litigation Division in Hobart, Tasmania. The National/ONEPNG
SHARE THIS
Share it Tweet Share it Share it Pin it