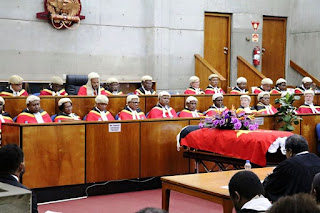 Chief Justice Sir Injia said her untimely passing has left a huge gap in the judiciary and will be hard to fill in but she will leave behind a legacy for other females to follow.
He extended the judiciary’s appreciation to the family of Late Catherine Davani for allowing her to share her life on the bench.

Meanwhile, AG Ano Pala expressed his sympathy towards the family of the late Judge and said though she is gone, her services to the country will last a lifetime – “she has left a legacy as the first women judge of Papua New Guinea.”
SHARE THIS
Share it Tweet Share it Share it Pin it