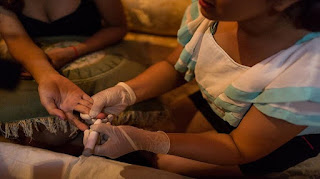 Titled Pacific Multi-Country Mapping and Behavioural Study: HIV and STI Risk Vulnerability among Key Populations, the study examined the behaviour risk factors and social and structural determinants of risk that drive the epidemic among vulnerable groups, such as men who have sex with men, transgender people, sex workers and seafarers.

The HIV epidemic in the Pacific region is characterized as low prevalence. However, despite the low overall rates of infection, the region is vulnerable to an increasing HIV epidemic. This is due to several factors, including inadequate data on key populations, limited awareness and understanding amongst policy makers of the epidemic’s potential long-term impact, unsupportive policy and legal environments, inadequate health systems, presence of stigma and discrimination against certain vulnerable groups, and low levels of community capacity and engagement in the policy making and programme implementation.

The data on female sex workers was concerning. Condom use among female sex workers was also reported to be low, for example in Tonga only 18 percent of sex workers used a condom for sex with their last client. Across the region, they reported facing high rates of stigma and discrimination, as well as violence and abuse at the hands of clients, non-paying partners and family.

Access to HIV testing and treatment, care and support services were found to be poor, as was condom outreach, across all key population groups and countries.

“This research identifies key social and legal barriers that are hindering HIV prevention efforts that must be addressed, and lays out clear recommendations for policy makers and health programmers,” said Maisoon Elbukhari Ibrahim, Programme Manager, UNDP Pacific Office in Fiji. “Bringing the HIV epidemic to a halt is crucial to ensure that the social, health and economic development gains amassed in Pacific island countries continue to improve, and not be endangered.”

The data produced will be used by countries to support their regional and global reporting obligations and to inform national and regional planning, as well as to empower vulnerable groups to mount strong advocacy cases for change. A key finding of the study was the need for more inclusive services and programmes.

“This research quantifies and reaffirms most of the information and knowledge that we in the community already know about the stigma and discrimination that is faced by men who have sex with men, transgender persons and sex workers in the Pacific. It will provide a crucial basis on which we will build and strengthen interventions,” said Isikeli Tumaiwakaya Vulavou, Pacific Sexual Diversity Network, a regional civil society group advocating for human rights of key populations. “The ‘zero goals’ of zero new HIV infections and zero AIDS-related deaths will not be achieved unless we reduce stigma and discrimination to zero.”

In addition to collecting data on behaviour, the study also conducted population size estimates in each of the nine countries, filling a gap needed for effective public health programme design and planning.

“For the first time, many of these countries now have key pieces of evidence on which to base HIV prevention programmes for those groups most vulnerable to HIV,” said Professor Heather Worth, the lead researcher of the study from the School of Public Health and Community Medicine at the University of New South Wales.

The study and regional HIV forum were supported by UNDP and the Global Fund through the Multi-Country Western Pacific Integrated HIV/Tuberculosis Programme, which aims to improve the coverage and quality of HIV and Tuberculosis prevention, treatment and care in 11 western Pacific countries.

The full country reports of the study will be published on the UNDP Pacific Office in Fiji website in December 2016.