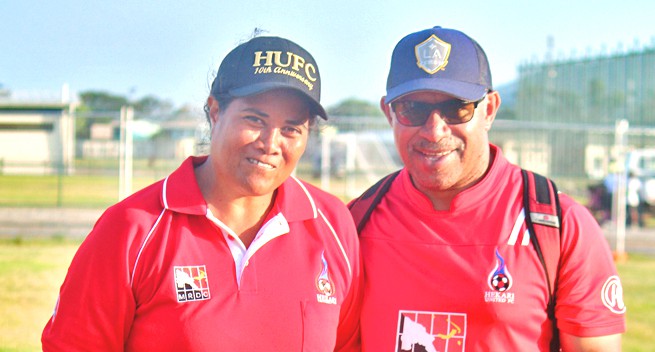 “I want to take this opportunity to congratulate all the PNG girls who played so bravely in the past few days and closed it off in style with a goal,” says Mrs. Vonnie Natto.

Vonnie said to make into the world cup was pretty hard for PNG as it will take time, effort and proper management with strong discipline.

“History has been made in 2016 and it may take a while before PNG girls really make it to the next under 20 FIFA World Cup on merit because the competition is so high and only the best teams qualify for a contest as this.”

“Fortunately for PNG, it was given the privilege to take part in the 2016 FIFA Competition as a host nation to participate and this is a bonus for us and history is in the making,” she said.

Mrs. Natto smilingly said, “we (PNG) also made history in the under 20 Fifa World Cup history by suffering the highest scores scored against us and I can say this is really evident of PNG because we do not have soccer academy for girls or boys to breed players of World Cup standard (the one in Lae is closed now).”

“There is no female competition in this country unlike the male, there is no player discipline. All the players played their best with the little skills they knew. Until we improve the competitions for all female, our next Fifa World Cup dream may not materialize,” Vonnie said.

“My vision for this nation as a female heavily involved in soccer is to see that this country build soccer academies in the main centers, have soccer development plans and roll out plans in planning for implementing, increase participation and competition and in that way many raw talents out there will display their potential and make it.”

“To be a participant in Fifa World Cup, the young girls that came to play in PNG sacrifice a lot and they must live a disciplined life. No party for longer hours, no drinking and smoking and many other un wanted social behaviors that are not good for the game.”