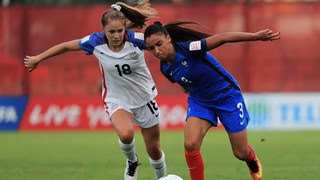 Heavyweights France and USA battled out a hard-fought scoreless draw to open Group C at the FIFA U-20 Women’s World Cup in Port Moresby.

In truth there was little genuine goalmouth action in the first half as two well-matched, athletic and organised teams stymied each other in the warm conditions.

USA striker Mallory Pugh always looked dangerous, befitting of her status as a member of the senior Stars and Stripes’ side. Notably one direct run cut straight through the heart of the France defence but, despite a well-hit low shot, she was denied by Mylene Chavas' cat-like diving save.

The chance of the match came for France on the hour-mark with an opening created by the fierce pace and close control of the impressive Delphine Cascarino. The Lyon forward burst down the right, beat her defender and pulled back for Clara Mateo, but Maddie Elliston made a crucial block virtually on the goalline.

Suddenly the match was alive as the sun started to set and cooler temperatures arrived. Almost immediately Pugh had a decent opening after a typically driving run, but she fired over under pressure.

The tempo quickened and the spaces opened up, but there was to be no goals despite both teams pushing for a winner. France, though, enjoyed more possession in the latter stages and proved they will be a real handful at Papua New Guinea 2016.