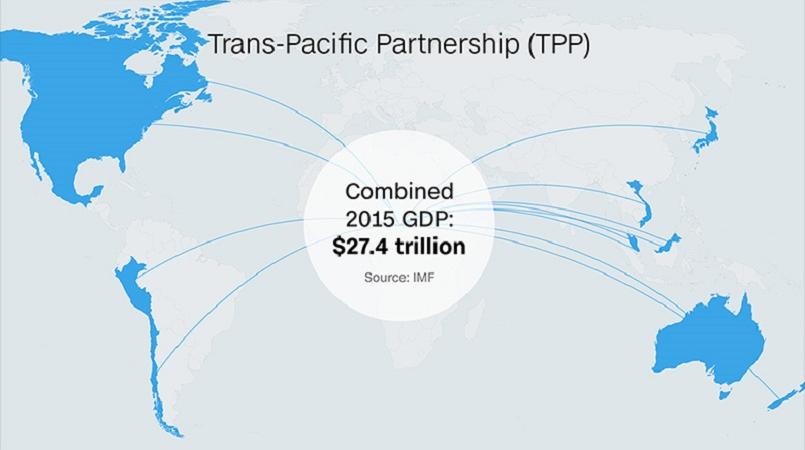 If Donald Trump turns his back on Asian economies, China is ready and willing to step into the vacuum.

During the election campaign, Trump blasted international trade deals, tapping into a deep well of popular anger over the effects of globalization. Now, President-elect Trump's first victim could be the huge Pacific trade agreement that he slammed as a "disaster done and pushed by special interests who want to rape our country."

The Trans-Pacific Partnership (TPP) was a key plank of President Obama's push to boost U.S. influence in Asia. But now it looks doomed, with Congress refusing to ratify it and Trump having vowed to kill it.

"You can't overestimate what a change this is," said Edward Alden, a senior fellow at the Council on Foreign Relations. "The United States has been working since the end of the Second World War to liberalize trade."

China isn't waiting around for the TPP's funeral. It's already pushing its own trade deal with leaders from around the Pacific as they gather for a summit in Peru this weekend.

"The prospect of the U.S. turning inward in its economic strategy means that China has freer rein to become the focal point of regional integration efforts," said Mireya Solis, a senior fellow at the Brookings Institution. "The U.S. appears as largely bereft of a constructive economic strategy towards the most dynamic region in the world."

Linking the U.S. with 11 countries around the Pacific, the TPP would have been the biggest regional trade deal in history, spanning nearly 40% of global GDP and about a third of world trade. China didn't take part in the talks.

The Beijing-backed plan, the Regional Comprehensive Economic Partnership (RCEP), is smaller economically. It covers 16 nations, accounting for almost 30% of global GDP and more than a quarter of world trade. But if that succeeds, China would be in a strong position to lead a bigger, more ambitious Asia-Pacific free trade area in the future.

'We can't let countries like China write the rules'

Beyond the numbers, the TPP was an effort by the Obama administration to spread U.S. standards for labor and the environment.

"We can't let countries like China write the rules of the global economy," Obama said last year. "We should write those rules."

Despite warnings that the TPP would kill jobs and worsen income equality, experts say its slow death is bad news for American interests in the Pacific.

"U.S. failure to follow through on TPP is a huge blow to the credibility of its Asia policy with important economic and geopolitical repercussions," Solis said. "Other countries will move forward with RCEP and American companies will be at a disadvantage."

Since Trump's victory, top officials from countries that signed up to the TPP -- including Japan and Australia -- have been cited as saying attention is likely to shift to China's plans.

Chinese President Xi Jinping has held meetings in recent weeks with the leaders of the Philippines and Malaysia, traditional U.S. allies. And he'll have the chance to meet more this weekend at the Asia-Pacific Economic Cooperation summit in Peru.

On the face of it, China appears pleased at the opportunity it's been given.

"Beijing is understandably relieved that the exclusive, economically inefficient, politically antagonizing TPP is looking ever less likely to materialize by the day," said an editorial this week in state-run English-language newspaper China Daily.

But Trump's protectionist rhetoric, which has included a threat to slap tariffs of as much as 45% on Chinese products, creates a host of new concerns for China, which has benefited enormously from trade and sells more goods to the U.S. than any other country.