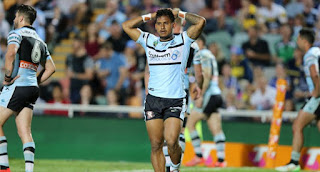 Ben Barba has been granted an immediate release from his playing contract after reportedly testing positive to cocaine.

News Corp Australia revealed on Tuesday that he was tested four days after Cronulla’s maiden grand final win, and the Sharks have now confirmed that the star fullback will undertake an intensive overseas program to address significant personal issues.

Barba says he hopes to return to the game in the future, but his welfare is his only priority right now.

“I know and accept I need to take some time away from the game to deal with some personal issues. I am accountable for myself and my actions and if I don’t address them now I will certainly ruin my career and more importantly my life and that of my family. As footballers we often find it hard to speak up about having problems, but this decision has lifted so much pressure off myself that I cannot start to explain just how much better I feel by taking this action.” Barba said.

“I hope to return to the game at some stage and am very grateful for the support of the Cronulla Sharks and I hope that one day I can again play beside this terrific bunch of guys. I have made some tremendous friendships both within the playing ranks and throughout the coaching and administration teams. This has made it all the more difficult to make this decision but it’s something I just had to do.”

Sharks CEO Lyall Gorman said it was the best decision for everyone involved.

“This is an incredibly difficult situation for Ben, his family and our Club and all involved with it. Ben has made a remarkable contribution to our club and community since joining it. It is however something we believe and accept is absolutely necessary in order to assist Ben to work through the challenges at hand,” said Gorman.

“While Ben will be a major loss to our football club, the far greater priority is for him to focus on his long term future away from football and we will continue to support Ben throughout that process in any way we can.”