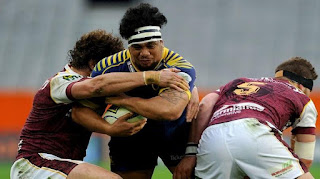 “There were three teams, the Maoris, who had won the championship last year, Samoa and PNG, who were the 2014 Champions, and last year’s Runners-up, all on 16 points and fighting for their place in the finals. A countback had the Kokomos ten points behind the other two teams, resulting in a Samoa vs Maoris Final,” said Head QLD PNG Coach, Elias Paiyo.

Characteristic of the championship as a whole, the final between Samoa and the Maoris was a nail-biter. With less than a minute to go the Moaris looked to have their second successive championship all wrapped up but a determined Samoa refused to give up the fight. They scored on the bell winning the match 18 to 12 and recording their first ever QPICC Carnival Championship.

Speaking to Paiyo after the carnival, he said though they didn’t win the event, he was very proud of his boys pointing out that QLD PNG were the only team to have beaten eventual winners, QLD Samoa. He said Co-Captains, Steve Franciscus and Eli Wickham showed great leadership. He said he couldn’t have asked for more from either of them. Franciscus, in fact, was named MVP for QLD PNG.

Asked about talent to look out for, Paiyo heaped praise on a number of the boys. “Daniel Russell, who plays for Souths Logan Intrust Cup team, was a fantastic new addition to the Kokomos. His defensive game was outstanding. It was disappointing that he was elbowed in the head during the match against Samoa, and subsequently ruled out under the concussion protocol. He has a huge future in the game.”

“Robbie Fletcher at lock was dynamic. Emmaus Wartovo and Alex Ambia combined beautifully and carved up the opposition on numerous occasions with some deadly runs. LJ Waddups, who is only 19, played half-back brilliantly.” “Phillip Komboi, who is also 19, represented the Kokomos for the first time and played extremely well at second row, his raw talent was a surprise packet, keeping the opposition on their toes.“ Phillip is the son of former Kumul, Paul Komboi and is currently contracted with the Ipswich Jets Under 20s team. “Francis Han gave the team real go-forward, setting the platform with his rampaging runs, giving his team a strong foundation to build on.” “Chris Aiton, at dummy-half was strong defensively and his organization brilliant, dominating the middle with many of his breaks leading to tries.”

“Cameron Boga, who played Centre and out on the wing, was creating real problems for the opposition defence with his step and speed off the mark.”

Asked where to now for the Kokomos, Paiyo laid out his plans. “What we do now is take a good hard look at our strengths and weaknesses firstly as a team and then to develop a program that further mentors and advances the individual rugby league careers of our Kokomos representatives.”
SHARE THIS
Share it Tweet Share it Share it Pin it