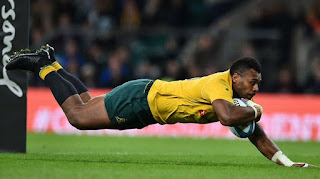 Samu Kerevi scored twice as Australia clinched second place in the Rugby Championship with an unconvincing 33-21 win over Argentina at Twickenham on Saturday.

The Wallabies returned to the scene of their Rugby World Cup semi-final win over the Pumas and the defeat to New Zealand in the final knowing victory would see them finish as runners-up following South Africa's 57-15 loss to the All Blacks.

In the first Rugby Championship match to be played outside of the four core territories, centre Kerevi, who scored his first international try in the reverse fixture in Perth last month, was the difference in seeing off a spirited Argentina side.

Bernard Foley kicked 13 points and Adam Coleman and Dean Mumm also scored for Australia, but the scoreline ultimately flattered the Wallabies and should do little to inspire confidence ahead of another meeting with New Zealand in two weeks.

Argentina were denied by the TMO in the first minute as Santiago Gonzalez Iglesias - playing at fly-half in the absence of the injured Nicolas Sanchez - was ruled to have collected Leonardo Senatore's charge down of Will Genia's kick from an offside position.

And soon after the Pumas were left to fume at the TMO once more, Coleman powering over for his second international try, which was awarded despite Dane Haylett-Petty appearing to have spilled the ball in the build-up.

Foley added the extras and then a penalty to make it 10-0 to the Wallabies, but Argentina responded as centre Matias Alemanno went over from a line-out drive shortly after Australia's Michael Hooper had been sin-binned for a high tackle.

Another Foley penalty extended Australia's advantage to eight points, while at the other end Gonzalez Iglesias missed his third kick of the contest by sending a relatively straightforward penalty off target.

Coleman was next to see yellow shortly after the half-hour mark for grabbing half-back Martin Landajo around the neck, but Argentina could not take advantage.

Instead Australia stretched their lead further through Kerevi, who broke through an Argentina tackle to cross the line after slick hands from Michael Cheika's men.

Gonzalez Iglesias found some form with the boot to cut the gap to 18-8 at half-time and Argentina put themselves right back in contention as centre Jeronimo de la Fuente's quick tap caught Australia off guard.

However, Argentina gifted Australia breathing room in the 50th minute when a sloppy Guido Petti pass allowed Kerevi to stroll in under the posts for his second try.

Another Gonzalez Iglesias three-pointer kept the Pumas in touch, though, and Argentina began to dictate matters as the half progressed.

Argentina wasted numerous opportunities to make the pressure count, but did trim the deficit to four points through the boot of Gonzalez Iglesias, Nick Phipps conceding a penalty for shoving the Pumas' physio.

But Foley made it a converted try difference with his third three-pointer and the game was finally made safe through Mumm's interception score late on.