Attackers must be identified and arrested : Gamato 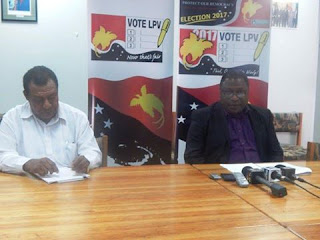 Electoral Commissioner Patilias Gamato has strongly condemned the attack on (5) of his staff member in Mendi Southern Highlands on Wednesday morning.

The five Electoral Commission officers including 3 females were on their way to Mendi from Mt Hagen to officiate the official hand over, take over ceremony of the Southern Highlands Election Manager when they were confronted by a huge crowd of over 400 people.

The crowd convoyed in about 20 vehicles and blocked off the road at the Anga River near Mendi.
"These people came with bush knives, sticks,stones and they were questioning my officers why they were trying to replace David Wakias's position as the Election Manager for the province with someone else"

"They punched one of the male officers Alwin Jimmy and they pushed the female officers away, threatening them with bush knives and stones, and they also stole their bags and personal belongings including money for the trip" said Gamato.
Mr Gamoto explained that, they 've recently appointed Mr Jacob Kurap as the new Election Manager for Southern Highlands replacing Mr David Wakias and the trip this morning was to do a formal hand over ,take over.

Mr Gamato said Mr Wakias is not the only Election Manager being replaced, the Electoral Commission is also doing the same in other provinces as the long serving Election Managers are getting too close with MPs and this is compromising their role during elections.
He called on the Police Commissioner to arrest Mr David Wakias as per the complaints that were made by the 5 officers at the Mt Hagen Police station.

Mr Gamato is also calling on the public to respect officers of the Electoral Commission as they are also updating common rolls at this and they must feel free to move around and do their work without any threat.
Meanwhile the Electoral Commission is yet to decide if it will be safe for the team to go back and complete the hand over, take over. Ceremony or head back to Port Moresby.
SHARE THIS
Share it Tweet Share it Share it Pin it