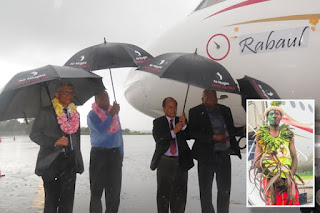 AIR Niugini has named a Fokker-100 aircraft ‘Rabaul’ in a ceremony attended by airline executives and members of the East New Britain government at Tokua airport, Kokopo.
Air Niugini board chairman Sir Frederick Reiher said this was in recognition of East New Britain’s contribution to the airline since it first began operations more than four decades ago.
“We have decided to name this aircraft Rabaul in recognition of the significant contribution ENB has given to Air Niugini, particularly our domestic service” Sir Frederick said.
“Interestingly, the very first Air Niugini flight since it commenced operations on 1st November 1973 came here to Rabaul. It was PX100 POM/RAB/LAE.”
Sir Fredrick said the airline was committed to developing East New Britain into a regional tourism hub aligned with the Government’s economic plans.
“East New Britain and its capital Rabaul, have been nominated for tourism development,” he said.
“The naming of this aircraft after this important regional airport and community reflects the commitment Air Niugini has to maintaining affordable and safe regional airline service across the nation.”
SHARE THIS
Share it Tweet Share it Share it Pin it