Traditional Chieftaincy ceremony to be revived during Independence 2016 in Gulf 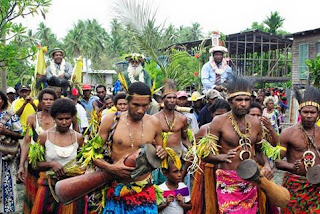 The village of Iokea in the Gulf Province will come alive from Thursday the 15th to Saturday the 17th of September 2016 with over 1, 000 people all over Gulf converging in Iokea Village for an initiation ceremony for all villages in the Moripi Constituency of Iokea, Sepoe, Miaru and Lese with Paramount Chief of Moripi and former Governor Chris Haiveta expected to attend in his capacity as Paramount Chief as well, to coincide with Iokea villages independence day celebrations for this year.
The organising committee made up of vibrant young Gulf leaders and their families are preparing for the event in a bid to do something for their province and give back to their villages, the ceremony will see 30 pigs plus traditional food items been distributed to all the chiefs of Moripi in what is called a Sevese and Pukari Sosoka or feast in the Toaripi dialect of the Gulf province.


The event will start with the singing of the national anthem and a flag-raising ceremony to honour independence day before proceeding to their main program, with the traditional initiation ceremony which will see the people of Moripi constituency revive the traditional chieftaincy system where the chiefs once governed with authority and power, sadly in many cultures throughout PNG, the chieftaincy system has lost its glory with many young people forgetting their culture and traditions preferring the introduced ways of Western culture, and it is hoped through this event many young people back in the villages of Gulf will hold in high esteem this event.