Miss Pacific Islands Pageant PNG is an advocate of education 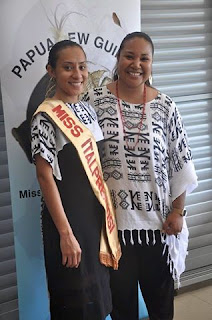 The third contestant in the Miss Pacific Islands Pageant (MPIP) PNG is an advocate of education within family as an important tool to groom good citizens.
“Education starts from within the family, and it starts with the guidance of either parents or guardians,” says Dorothy Elliott
Twenty five year-old Miss Elliot is of mixed Central and Milne Province, and works at the Institute of Business Studies (IBS).
She is being sponsored by gold refining company Italpreziosi, which is based in Port Moresby.
Miss Elliot said education was a powerful tool that changed lives and with good upbringing, someone’s future could be determined.
“It’s about what’s being taught in the home that is reflected in someone’s character. How much exposure they have had in good upbringing determines how they think and behave.”
“I believe that educating people within families and communities about their rights, law and justice, and ways to live would make better citizens.”
Deputy Chairperson of the Miss Pacific Islands Pageant PNG, Mrs Molly O’Rourke thanked Italpreziosi for supporting the MPIP PNG again this year.
Last year Itapreziosi sponsored Miss Takeiti Vetali who went onto win Best Talent and was a joint winner in Best Traditionally Inspired Dress.
“The pageant is not just a stage for providing our young women an opportunity to act as cultural ambassadors for their country; it also raises funds for a scholarship fund which assists young women to complete their education in tertiary institutions and colleges around the country.”
“Sponsors like Italpreziosi have shown a true spirit of collaboration to empower our young women. We believe that education is the key to success and prosperity of this country.”
In the last five years, the MPIP PNG has raised over K500, 000.00 for its scholarship fund and has assisted 152 young girls from around PNG to complete their education.
Mrs O’Rourke said this year each contestant would be assigned to a designer from the MPIP Project Runway which was staged on July 30, so that her wardrobe, sarong and Traditionally Inspired Dress can be tailored.
SHARE THIS
Share it Tweet Share it Share it Pin it