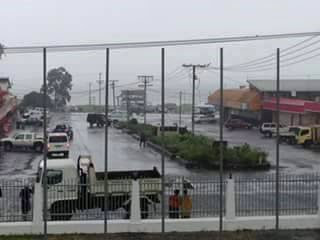 An attempt to rob the PNG Air Office in Alotau MBP this morning by a criminal gang was foiled by police – thanks to quick response by the coppers that saved the airline office and 3 other offices housed by Alotau Supermarket.

The attempted robbery that happened at around 10am this morning saw officers from PNG Air, and 3 other offices been held hostage for almost 4 hours as police awaited the criminals to exit the building as they barricaded the whole town and the building.