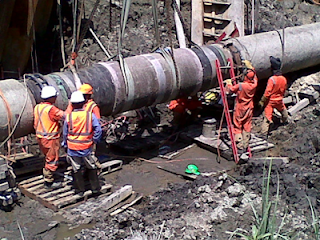 EXXONMobil Corporation (EMC) is acquiring InterOil for more than US$2.5 billion (K8 billion), under which the global giant will acquire all outstanding shares of InterOil, according to the companies.
“This agreement will enable ExxonMobil to create value for the shareholders of both companies and the people of Papua New Guinea,” EMC chairman and chief executive officer Rex Tillerson said.
“InterOil’s resources will enhance ExxonMobil’s already successful business in Papua New Guinea and bolster the company’s strong position in liquefied natural gas.”

InterOil chairman Chris Finlayson said: “The company’s board of directors thoroughly reviewed ExxonMobil transaction and concluded that it delivered superior value to InterOil shareholders. They will also benefit from their interest in ExxonMobil’s diverse asset base and dividend stream.”
Under the terms of agreement with ExxonMobil, InterOil shareholders would receive:
n A payment of US$45.00 (K140) per share of InterOil, paid in ExxonMobil shares, at closing.
n A contingent resource payment (CRP), which would be an additional cash payment of US$7.07 (K22) per share for each trillion cubic feet equivalent (tcfe) gross resource certification of the Elk-Antelope field above 6.2 tcfe, up to a maximum of 10 tcfe.

When concluded, this transaction would give ExxonMobil access to InterOil’s resource base, which included interests in six licenses in the country covering about four million acres, including PRL 15 which is the anchor field for the proposed Papua LNG project.
The companies said in a statement that the PNG LNG project, the first of its kind in the country, was developed by ExxonMobil in challenging conditions on budget and ahead of schedule and has exceeded production design capacity, demonstrating the company’s leadership in project management and operations.
ExxonMobil will work with co-venturers and Government to evaluate processing of gas from the Elk-Antelope field by expanding the PNG LNG project.
“This would take advantage of synergies offered by expansion of an existing project to realise time and cost reductions that would benefit the PNG Treasury, the Government’s holding in Oil Search.”
SHARE THIS
Share it Tweet Share it Share it Pin it