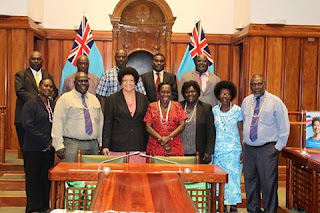 
Training focused on the role of Parliament in the process of national peacebuilding. It covered a range of issues, including the oversight functions of the Parliament, social accountability, inclusion of civil society and citizens as tools for effective peacebuilding approaches to gender mainstreaming and more.

During their stay, the Parliamentary team paid a courtesy call on the Speaker of Fijian Parliament Dr. Jiko Fatafehi Luveni, and also met with parliamentary committees including the Law, Justice, and Human Rights and Natural Resources committees.

A Bougainville Parliamentary spokesman representing the team hailed the training programme as a major success. According the spokesman, besides the training on peace, stability and mediation, the team was able to witness the differences in structure of the Fijian Parliament and that of the Bougainville House of Representatives. This included transparency of the law-making process in the Fijian Parliament, the linkage between the customary and formal government, the effective management of land tenure systems, the growth and development of the tourism sector as a major revenue earner and many other innovative parliamentary insights.

“The training was a major success and an eye opener for Members of the Bougainville. Most of us in Bougainville are not aware of the high level of perception that the international community especially in UN circles has of the Bougainville Peace Process. It was a major learning experience about how successful our peace process on Bougainville has been despite some setbacks. We came out of the training proud that Bougainville can be a model for peace-building on the world stage and it has encouraged us to work harder with our people to build peace” said David Braun, ABG Member for Tinputz.

UNDP supported participation of the parliamentarians as part of its wider efforts on peacebuilding in Bougainville. Funded by the UN Peacebuilding Fund (PBF), which provided more than $8 million USD since 2014, it aims to support the peace process in Bougainville and help to create an enabling environment for a credible and inclusive referendum, together with other UN agencies on the ground.
SHARE THIS
Share it Tweet Share it Share it Pin it