6/26/2016 Headlines, PNG News
Around 10pm last night (Saturday), a group of men armed with bush knives attacked a student in the male dormitories in C block in an apparent targeted attack.

"We regret to inform that the student passed away a few hours later as a result of his wounds," said Unitech vice-chancellor Dr. Albert Schram in a statement. 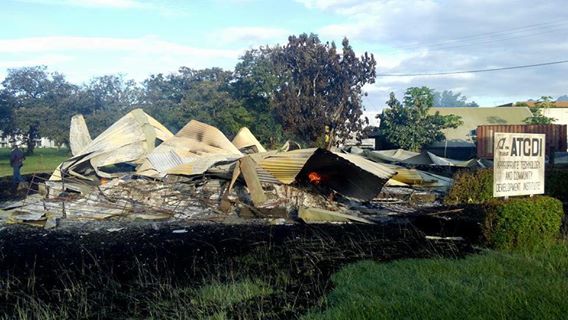 "The management was on the ground immediately, and has been dealing with the situation as it developed. They were assisted by the university police and security guards, plus a few dozen men from the Lae police, who had been called in earlier last week to protect students and university property."

“Subsequently, a group of marauders proceeded to set fire to various academic buildings. The power supply was cut off, and the telephone network went down”, said Dr Schram.

At around 1am, fire was set to the SRC president's residence, DODL and ATCDI buildings, and finally the mess. These buildings suffered substantial damage from the fire.

At around 2am, the Chief Security officer sounded the campus alarm siren, and the Metropolitan Superintendent sent in extra security forces as reinforcements.

"Regrettably, for some time the forces were outnumbered by the marauders, who constantly moved about campus.

“Finally, in a joint effort, the forces deployed on campus were able to disperse the marauders using tear gas."

The university management is dealing with the evacuation of all students from campus, since the mess will be out of operation for several months to come.

“The evacuation of most students will be completed during the morning, since the university can no longer provide food”, said Dr Schram.