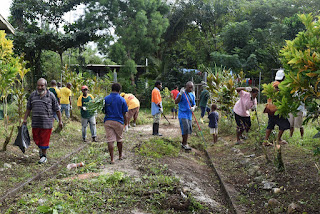 The Seventh Day Adventist (SDA) churches in Kiunga, Western Province, have done a major clean up at the Kiunga Hospital as part of their community engagement and outreach.
On a bright Sunday morning, Kiunga and Mepu churches came together, with congregation numbers reaching well over one hundred, bringing along bush knives, rakes, wheel barrows, brush cutters, forks and spades with one goal, and that was to clean the Hospital grounds.
The church goers cleaned up by cutting grass, pruned and planted flowers, cleaned and dug blocked drains and also disposed of hospital rubbish.
Kiunga SDA church elder, Mark Gena, who was in charge of the clean-up and also works at the hospital, said the churches decided to do something different for the hospital.
“We always help out the hospital by visiting the sick patients and assist in feeding them and giving them gifts as part of our community contribution.” Gena said.
He said the idea was suggested by Head Elder of the SDA Churches in North Fly District, Paiyo Bale, who said visiting the hospital was great but wanted the church to do more.
“Mr. Bale is a well-respected church elder and also a successful local businessman in the province and when he suggested the idea we all agreed as this was the least we could do as a church to the hospital.” Gena explained.
“The hospital area, especially places like the outside and those areas people don’t frequent needed cleaning and we as a church agreed that we would take the initiative to do that and we came in numbers for that.” Gena added.
Kiunga Hospital Administrator, Graeme Hill, was pleased with Mark and the churches’ kind gesture.
“The hospital ground looks different, it looks clean and the SDA churches have done a tremendous job, they had over a hundred people here to do the clean-up, thanks so much to every one of you.” Hill said.
The church said they would continue to do such activities in the future as part of giving something back to the hospital and Kiunga community.
Kiunga Hospital is supported through the OTML financed North Fly Health Services Development Program and managed by OTDF: a model public private partnership between local health services and Abt JTA as the implementation partner.