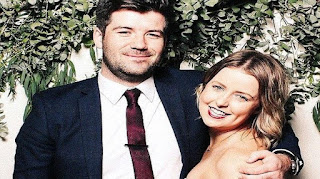 A woman who was bound, gagged and raped by an intruder in front of her boyfriend during a trip to Samoa in September is now seeking donations to help put her alleged attacker behind bars.

Angie Jackson and her partner Tommy Williams woke up around 2am on September 24 to board their flight to Sydney when a Samoan man appeared in their hotel lounge room at the resort with a pair of scissors and sexually assaulted Angie before stealing their money and belongings and fleeing.

'He asked me why he shouldn't kill us. Why shouldn't we die. I answered because we have too much to live for,' Ms Jackson, who is from Hobart, recounted on a GoFundMe page.

The Daily Mail reports the intruder bound Tom with their clothes that he had ripped up and tied her hands behind her back, Ms Jackson said.

'I begged for our lives. I told Tom I love him. Over and over.'

She said she then felt the man's hand run along her back before he raped her.

The man then forced her to unlock her iPad with her toes since her hands were behind her back.

'Here was his error. Though we were in the dark, the iPad illuminated his face very well, which he didn't even attempt to cover. I lay there and studied his face,' she said.

Ms Jackson said he then bound her feet and pulled the covers over her and Mr Williams.

'I was just waiting, waiting for those scissors to go straight into my back,' she said.

'I heard him say to Tom, 'I'm sorry brother, please forgive me. I am hungry.'

He walked around the hotel room gathering their money and electronics before being startled by the hotel manager who had noticed the young couple had missed their arranged taxi time.

Ms Jackson and Mr Williams spent the next two days speaking with police.

'After being presented with a series of photos, I was able to identify our attacker…the Samoan police re-captured him on the 4th of October 2015.'

A trial is set for June 27 and Ms Jackson and Mr Williams have been asked to be witnesses at court in Samoa.

The couple is now trying to raise money so they can attend the trial and still fund their rent and other expenses.

They are also hoping to pay back Ms Jackson's mother, who hired an attorney for the trial and for members of both of their families to travel with them for the trial so they are not alone.