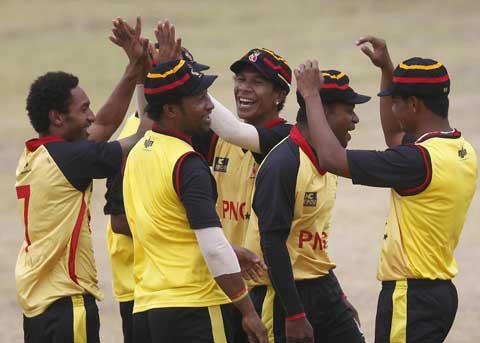 THE Hebou Papua New Guinea Barramundis play on home soil for the first time in a sanctioned International Cricket series with Kenya this weekend.
At stake is PNG’s standing as a progressive cricket power among the associate nations of the ICC; and having reached a ranking inside the top 20, Cricket PNG will be desperate to maintain that standard and build on the successes of the past 24 months.
It has been a gruelling period for the country’s best cricketers and they have been tested across all formats, from the four-dayers to the T20.
The national side has not played on home soil as a team in more than two years and this series offers the opportunity for coach Dipak Patel’s men the chance to play in front of their fans.
One cannot discount the power of the home support and playing in familiar surrounds.
For Kenya, this series is just another challenge on the long road back to regaining their status as a nation once on the cusp of full-member status.
The days of impressive fighting performances seem to be in the past but Kenya, with a young side are looking to get back on track.
One gets the feeling the Kenyans are on a redemptive crusade that sees Amini Park as one of several battle grounds they will see action on in their quest to return to where they were a decade or so ago.
The two matches scheduled for tomorrow and Monday pit an experienced Kenyan side against the collective will of the hosts.
Barramundis captain Jack Vare, who is the side’s wicket-keeper, is in many regards the team’s binding agent with his resolute and cool handed approach.
Despite a mixed bag of results, PNG sits in the bottom-half of standings in both the I-Cup and the World Cricket League Cricket League Championship and are very much a team in the middle of learning its way at this level one challenge at a time.
Batsmen Lega Siaka and Assad Vala hold the key to PNG’s fortunes. Vala is undoubtedly the country’s premier batsman and has proven his mettle over the years. Siaka is the rising star destined for big things. Both men will complement each other and if they fire, Kenya will find it all but impossible to come away victorious. The National/ ONE PNG
SHARE THIS
Share it Tweet Share it Share it Pin it