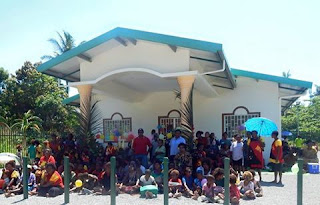 Making ends meet in the city as a widow is not easy but for those in the Joyce Bay Community just outside the city of Port Moresby, persistence does it. Whether it is from selling a sago pudding to a tailored meri blouse, the widows from the Joyce Bay Widows Association meet every Tuesdays at their community hall to sharpen their skills and learn from each other’s experience.
Widow Mrs Patrick Sauwia who coordinates the activities of widows say they are fortune to have a community hall that has recently being opened under the initiative of the current member for Moresby South Minister Justin Tkatchenko. Sauwia says the widows are also doing their banking with the PNG Widows Micro-bank and they look forward to grow. Meanwhile, with the Small to Medium Enterprise (SME) Policy for Papua New Guinea launched this year with the ambition to grow SME’s from 49 500 to 500 000 and to increase the citizen control over the formal economy from 10% to 70%, community assets such as a community hall goes a long way in achieving such ambitions.