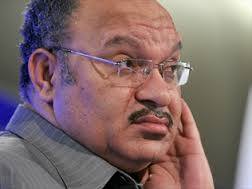 I understand that the question you are referring is about the high profile arrest by police recently.
I don’t want to be seen to be interfering with the police work they are simply doing their job as far as I am concerned.
I will let the Police Commissioner to make comments as he has done in the Post-Courier.
Let me say this as far as my personal case is concerned.
I am not going to allow the office of the Prime minister to be demeaned, questioned when they are false allegations, where there is no evidence of financial benefit or corrupt practices that has given anybody any financial benefit and set a very bad precedence for this country where for future Prime Ministers, anybody, any policemen will or can go and get a warrant on anything and simply arrest the Prime Minister.
We cannot allow this to happen in this country. Of course nobody is above the law but you must have credible concrete evidence that this particular charges will stand in court.
Similar to those that have been charged, you must make an assessment that you have got solid evidence because you are trying to question the reputation of some of the very high profile persons and Papua New Guineans who have contributed to the meaningful development of our country over many, many years.
To question their integrity, to question their position in the country and society is simply unacceptable if you have not fully investigated the cases.
We cannot have a vigilante style of police operation in the country, and it is up to the Police Commissioner to take appropriate actions that he sees fit.
He is the one that has been tasked by the constitution as the ultimate power of running the police force, and the police Commissioner has got to use his power to assess some of these cases have merit to stand trial or not.
So that is where we are now in so far as the case is concerned.
SHARE THIS
Share it Tweet Share it Share it Pin it