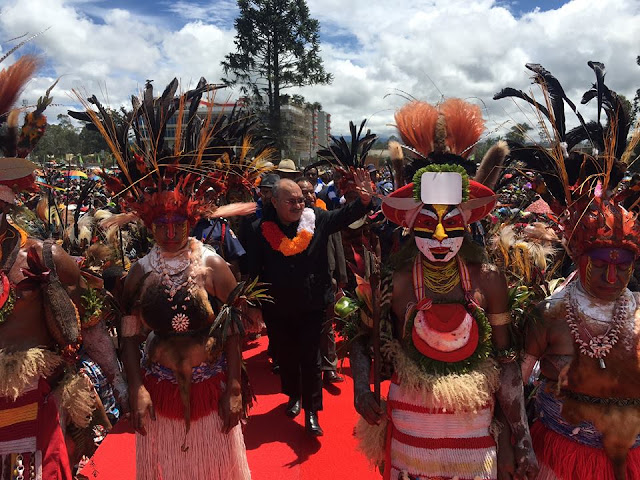 The visit by Prime Minister Peter O'Neill and various government ministers, to the hub of the Highlands Region, Mt Hagen City, was brought to a standstill, during the launching of the Mt Hagen City Authority and the National Development Bank (NDB) Branch.
Thousands of people flocked to the Queen Elizabeth Park, in the heart of Mt Hagen City, to witness these two auspicious occasions.
Whilst officially launching the Mt Hagen City Authority, the tribal leaders demonstrated much appreciation for the establishment of this authority, focussing strongly on cleaning up the city.
They said under the O'Neill government the people of this city have witnessed the construction of important infrastructure like the state-of-the-art Kapal Haus building, the modern Kagamuga International Airport, the sealing of the city roads along with the proposed four-lane road throughout the city, that is expected to commence shortly.
The tribal leaders also called on the other MPs to stop playing petty politics and let the O’Neill government continue what we the grassroots people see as true and tangible development.
They congratulated the Prime Minister on his recognition of the province of Western Highlands, as having a potential for tangible development, thus launching the Mt Hagen City Authority, which is starting to bring positive improvements to this city.
PM O'Neill also acknowledged the Hagen MP and Minister for Public Enterprises, Hon. William Duma.
"Mt Hagen will have the Government's undivided support in ensuring that this City Authority concept improves our lives here," PM O'Neill said.
He said due to the growth of various centres like Lae, Kokopo and Mt Hagen, with very large numbers of commuters daily, the Government established this concept to cater for and manage the large number of people in these cities, and he said it is working.
"The establishment of the Mt Hagen City Authority is a start of many more developments to come.
"Your government is determined to change Papua New Guinea for the better.
"The improvement of Mt Hagen City, as the central hub of the Highlands region starts today.
"I am very proud to see locals today taking ownership of Mt Hagen city and improving it.
"If we don't start improving Mt Hagen today, when will we do it?"
Following the launching of the Mt Hagen City Authority, PM O'Neill officially opened the Mt Hagen NDB branch - pronouncing this financial institution as the bank for the people.
"We will put in the same amount of funding in the branch to promote SMEs in the Highlands region.
"We have to give priority to our people so that they start their own little businesses, which will in turn improve your lives."
SHARE THIS
Share it Tweet Share it Share it Pin it