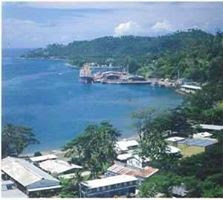 The Autonomous Bougainville Government Minister for Primary Industries, Nicholas Darku, has announced that the Inaugural Bougainville Chocolate Festival will be held from 4-8 July 2016 with events to be held in Buin and Arawa.
The festival is part of the ABG’s commitment to sustainable growth in the cocoa industry. It will bring together farmers and cocoa industry stakeholders to develop market links and boost production.
“The ABG is reaching out to famers and the chocolate festival will help to deliver assistance and raise the standards of the cocoa industry” Minister Darku said.
A central element of the festival will include international chocolatiers tasting and appraising chocolate made from Bougainville cocoa to provide farmers with feedback to lift production of high quality cocoa for international markets.
With agriculture displays and demonstrations, business development showcases and a variety of entertainment, the Bougainville Chocolate Festival is set to be a key event in the economic development of the region, as well as a fun day out for families.
Cocoa farmers have faced many challenges and constraints in recent years, including the unwelcome arrival of the damaging cocoa pod bora. The Chocolate Festival will be a much needed boost to provide farmers from all regions of Bougainville with opportunities to learn about new programs in place to assist them.
The Bougainville Chocolate Festival is an initiative of the Autonomous Government of Bougainville led by the Department of Primary Industries in partnership with the Australian Government.
Agriculture is a key area where the Australian Government is working closely with the ABG and the private sector to create income earning opportunities for women, men and youth in all regions of Bougainville, including disadvantaged communities.