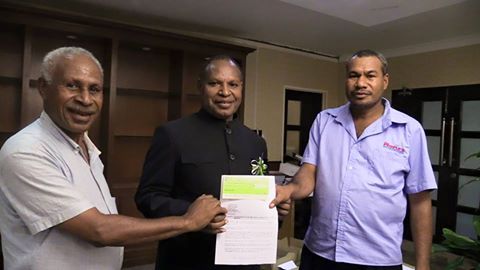 VITIS Industry Limited, a Papua New Guinea owned SME today presented a cheque worth K50,000.00 towards the launching of the SME Policy and Master Plan for 2016-2030 which will be held at the Sir John Guise Stadium Indoor Complex tomorrow evening.
The cheque was presented to the Minister for Trade Commerce & Industry, Richard Maru today by Representatives of VITIS Industries Limited, Raymond Evari and Wilson Furia.
Minister Maru when receiving the cheque expressed gratitude towards VITIS Industry Limited for their assistance and highlighted that their support will go a long way in ensuring that all SME’s in the country have a policy and plan that will guide the future development path of the sector which will be our engine for sustainable growth.
Representative of VITIS Industry Limited, Raymond Evari on behalf of VITIS Industry stressed that the company recognizes the importance of having such documents in place.
VITIS Industry Limited has joined hands with the National Development Bank, SP Brewery, British American Tobacco (BAT) and Bank South Pacific who all presented K50, 000.00 each towards the launch.
Meanwhile preparations are well underway for the launching which will coincide with the closing of the 2016 Leadership Summit tomorrow in Port Moresby.
Minister Maru who spearheaded the formulation of the policy and plan, said the Policy will specifically feature a sector by sector approach for growing SME’s as well as a collaborative effort between all stakeholders to grow the sector.
Thenew SME Policy’s objectives are to:
1. Create a further 2 million formal jobs by 2030 by stimulating the growth of a further 50,000 PNG owned companies (SME’s) to 500, 000 by 2030.
2. Reduce those living beyond the poverty line to below 20 percent from 40 percent today.
3. Increase the SME contribution to GDP of up to 50 percent from less than 10 percent today.
Meanwhile Minister Maru said the SME Master Plan is aimed at achieving and delivering the objectives highlighted in the SME Policy as well as to assist empower more and more citizens to start, grow and own companies in the formal sector.
SHARE THIS
Share it Tweet Share it Share it Pin it