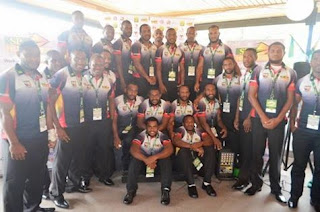 The SP PNG Hunters officially launched their 2016 season at the Port Moresby Aviat club yesterday with major sponsor SP Brewery and other support corporate sponsors present to mark the occasion along Government representative, Gulf Governor Havila Kavo, as Hunters Coach Michael Marum revealed the Hunters team for 2016.
Coach Michael Marum revealed that the Hunters will be led this year by Co-Captains and the honors went to Noel Zeming and Adam Korave.
“I believe this is the right balance for the team as Adam can lead the forwards from the front and Noel Zeming can lead the backs and they are the only two that can talk to the match officials,” said Coach Marum.
Apart from naming the co-captains for the Hunters, nine new faces were named in the 25 man squad for the 2016 Hunters.
The nine players are: Simon Peter, Sailas Gahuna, Benjamin Hetra, Tuvi Lepan, Justin Olam, Philemon Kimisive, Watson Boaz, Ishmael Balkawa and William Aquila, while the rest of the team remains the same.
The SP Hunters begins their campaign in the Queensland Intrust Super Cup on March the 6th against Souths Logan Magpies at Davies Park, Logan City Brisbane.
SHARE THIS
Share it Tweet Share it Share it Pin it