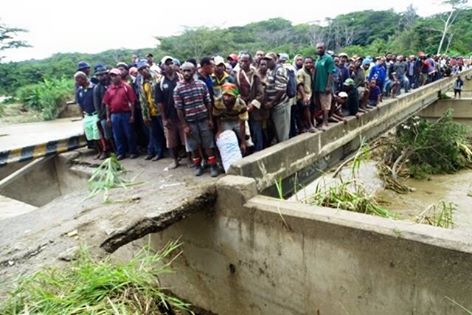 The broken section of the Bena Bridge which was washed away by heavy flood recently was fixed by the Works engineers and completed last night.
This was confirmed by Eastern Highlands Provincial Police Commander Alex N'Drassel, who says the bridge has been mended back to its original state by works officers and vehicles are using the bridge as normal as before.
However, PPC Drasel says another bridge at a place called ‘KOLWARA’ in Yonki was broken making it hard for container trucks to travel on but only light vehicles were able to travel across the bridge.
He says works engineers and police were deployed to area early this morning and have commenced work on the bridge.
In the meantime, locals at Yonki in the KOLWARA section where the bridge was damaged by floods are charging K100-K150 from traveling vehicles to shift their cargoes across the bridge.
Eastern Highlands Police Boss Alex N'Drasel says this is the work of opportunists who are using this natural disaster to rip off money from unsuspecting people.
PPC N'Drasel has deployed his men to the area last night and this morning to stop and monitor opportunist attempting to make money from this disaster.
SHARE THIS
Share it Tweet Share it Share it Pin it