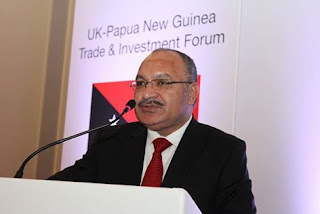 Papua New Guinea Prime Minister Peter O’Neill has praised the International Monetary Fund for presenting a frank assessment of the PNG economy.
A recent IMF report published in the media commended the government for achieving impressive economic growth in recent years.
The IMF projected economic growth for PNG to be robust in 2016, but warns of challenges posed by the sharp drop in commodity prices.
The global financial institution supported the move for PNG to debut the sovereign bond market, urging the government to use the funds raised to improve PNG’s debt profile and fund existing projects and commitments.
“This is a very frank assessment by the IMF and I welcome their comments and observations. Their recommendations are largely in line with the measures we as a responsible government took to protect our economy and fiscal position when the oil and commodity prices dropped drastically last year.
“The measures we undertook are reflected in the 2015 Supplementary Budget we passed and the 2016 Budget that will guide us this year and beyond.
“This year we hope to make our debut in the issuance of sovereign bond. This will help us raise money in the global market to improve our debt profile, and fund projects around the country that keep Papua New Guineans employed.
“Unfortunately there are people who know very little about the debt market; they continue to make ill-informed statements about the sovereign bond. They try to link it to the 4.2% equity in the LNG Project that is available to the landowners.
“This is all political hot air. The landowners’ interest and benefits from the LNG project are safe and guaranteed. It will not be extinguished, sold, or taken away by anyone, as suggested by the Opposition and other so called experts,” the Prime Minister said.
“Landowners have to now raise the funds to pay for the shares on terms they agreed with the National Government under the UBSA. The government will honor its commitment and also ensure that landowners’ interests are protected.
“The last thing we want to see is unknown and half-baked finance companies running around offering all sorts of deals to landowners. We have enough history of landowners being robbed of what is rightfully theirs,” the Prime Minister said.
SHARE THIS
Share it Tweet Share it Share it Pin it