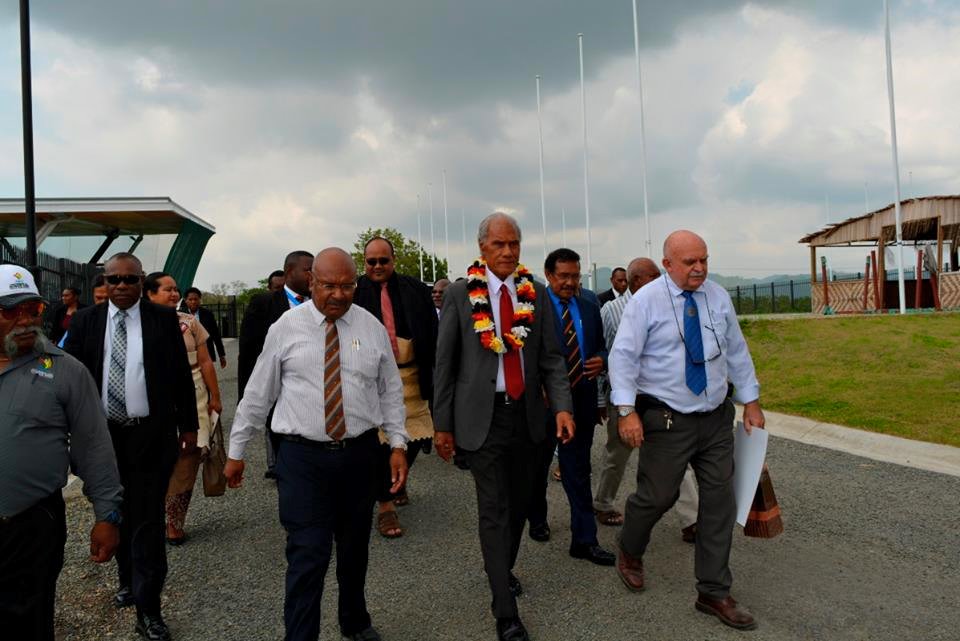 The Prime Minister of Tonga, Hon. Samuela ‘Akilisi Pohiva met the Prime Minister of PNG, Hon. Peter O’Neill in a bilateral meeting between the two countries on Monday 18 January 2015. He was accompanied by the Minister and CEO for Internal Affairs also responsible for Sports.
The main purpose of the Hon Prime Minister’s visit to PNG is to further strengthen the economic and social cooperation between the two countries in the sports arena. As the nation who has most recently hosted the Pacific Games, PNG has indeed set the benchmark at the highest standard – an esteemed position that the Government of Tonga aspires to meet.
As a result of the Hon. Prime Minister’s visit to PNG, the Government of PNG has committed to assist Tonga with the reconstruction of Teufaiva Stadium for track and field events. Additionally, PNG will also assist Tonga with its High Performance Center where elite sportsmanship will be prepared to represent Tonga in the Pacific Games and other international sporting events.
Notwithstanding the challenges presented with the planning and preparation for an event of such magnitude, the Government of Tonga remains committed to hosting the 2019 Pacific Games.
In the bilateral dialogue, the topics of West Papua, Climate Change, Pacific Regional Cooperation, and strengthening diplomatic ties were discussed.
The Hon. Prime Minister of Tonga and his delegation also met with PNG’s opposition leader, Hon. Don Polye MP, who also supported the Government of PNG’s commitment to assist Tonga prepare for the Pacific Games 2019. It was an honour for the delegation to attend a dinner function hosted by the Tongan Community in PNG. The Hon. Prime Minister also met with business leaders including the BSP Manager
The Tongan Government looks forward to working closely with PNG’s sports technical team, which is an opportunity to foster regional cooperation and strengthen mutual bond forged through sports events. PNG has experienced the unity of its nation through hosting the Pacific Games 2015, and Tonga desires to experience the same for its people.
The Hon. Prime Minister presented a special gift of a ‘fonu’ to Prime Minister Hon. Peter O’Neill, not only as a token in memory of his visit to Port Moresby, but as a symbol of love and friendship that was established between and among the Tongan Missionaries and the people of Papua New Guinea. It also symbolizes the spirit of unity and solidarity between and among the people of Papua New Guinea and the people of the Kingdom of Tonga.
The Hon. Prime Minister of PNG has accepted the Prime Minister of Tonga’s invitation for a delegation from Papua New Guinea led by the Minister for Sports and Tourism, Hon. Justin Tkatchenko MP, to visit Tonga at the earliest opportunity to share their experiences of planning and preparing of a Pacific Games, and to continue dialogue and mutual cooperation.