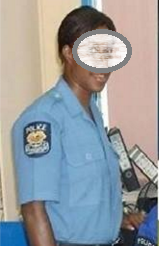 A female Police Officer has been arrested for recording Police who forced young woman to chew and swallow condoms.  ACP NCD Commander Sylvester Kalaut has confirmed  that two probationary police officers were the main suspects involved in forcing a young woman from swallowing condoms at the Boroko Police Station.

The female officer recorded the video of  her male colleagues who brutalized the young woman forcing her to chew and swallow the condoms. The video went viral on social media and  many have condemned the video.

Commander Kalaut says the women officer was detained on Friday and is currently locked up at the Boroko Police Cell while the male suspect involved who fled to his home province in Nipa will be picked up by police in SHP and brought to POM to be arrested and locked up as well.

Kalaut has also revealed that the victim was interviewed and has identified those officers involved, of which the female officer was the one taking the video of the victim swallowing condoms and the male officers were intimidating her to carry out the act.

At this stage the police is unable to reveal the suspects names until and after they appear in court.