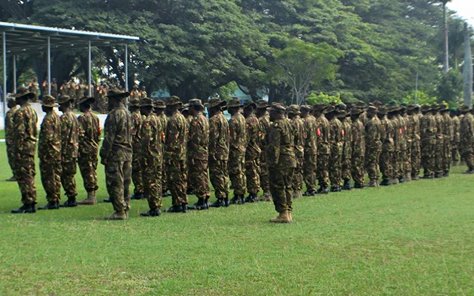 One soldier is dead and another in critical condition after an unfortunate incident with the locals up at Komo in Hela on Tuesday night.

According to the Acting Chief of Staff, Col. Raymond Numa the two soldiers were part of a 13 men contingent based at a Komo Exxon Mobil asset.

The two soldiers were with their team that tried to negotiate between two warring tribes because the tribes’ conflict was within the vicinity of the Komo Camp.

“Whilst the negotiation was attempted by the troops, the two soldiers drove back to the camp. On the way back they were blocked by the locals and attacked, one of the soldiers was chopped and killed instantly, whilst the other was seriously wounded,” said Col. Numa.
The identity of the two men are been withheld, but it is understood that the one killed is from New Ireland, while the injured one is from Eastern Highlands.

The army hierarchy has already issued orders to soldiers on ground to restrain from making any retaliation on the locals within the area because the matter is now in the hands of the police to bring the perpetrators to justice.
Meantime, the army is asking for the support and cooperation of the Hela Provincial Government, the Provincial Administration and the Komo community with the investigation, so justice is achieved for the families of the two men.
SHARE THIS
Share it Tweet Share it Share it Pin it